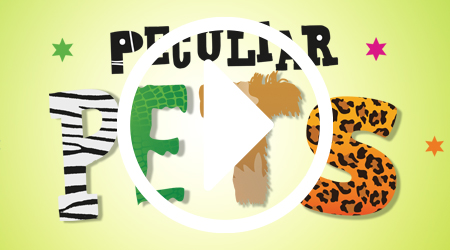 Engage your pupils with poetry writing this term

Peculiar Pets is about to take your classroom on an adventure that’s creative, exciting and lets imaginations run wild!

What would your pupils’ perfect peculiar pet be?
An acrobatic bunny? A tech savvy puppy? A vegan crocodile? A giraffe that likes to race? A superhero cat?

Pupils can create animal mash-ups, be inspired by their perfect pet or make their own awesome animal to write their poem about. It’s a great theme for sense, narrative or riddle poems as well as acrostics and rhymes. It also showcases poetic techniques such as imagery and alliteration.

It’s a roarsome poetry writing activity you and your pupils will love!

If your pupils are home learning or you want to go paperless, log in (or create) your free teacher account here: https://www.youngwriters.co.uk/teachers to use the fantastic Online Writing Portal.

The children thoroughly enjoyed this competition and were very enthused by the fact that their poems may be published!

Young Writers' Award of Excellence and an awesome book bundle!

Each will receive an awesome book bundle and a framed certificate

Every participating school receives a free copy of the book their pupils feature in!

Our 10 favourite published poets will each win a fantastic creative writing goody bag!

Every entrant receives a sticker and bookmark.
A certificate of merit for all young writers chosen for publication!

With lots of children out of the habit of poetry writing, we’ve got 3 helpful ideas to help get your class buzzing and raring to write.

- Give your pupils a specific poetry style to write in. An acrostic or sense poem is a great starting point for the beginning of term, or for those who would like a challenge why not try a haiku or limerick?

- Get pupils thinking of different techniques they can use when writing their poems. Alliteration, rhyme, and similes are techniques that go well with the Peculiar Pets theme.

- Get creative ideas flowing by sharing examples of other peculiar pets poems, we’ve picked these videos which may help; A.F. Harrold – The Ambitious Spider, Steve Attewell – The Worm that Wouldn’t Wiggle, and Roald Dahl – Crocky Wock the Crocodile. Once you have watched them discuss them with the class and see if you can spot the different techniques they have used.

Acrostics are a fun, simple way to engage students with poetry. Ask students to pick an animal and write it out vertically on a piece of paper. Explain that the lines don’t all need to be the same length, and it doesn’t need to rhyme!

Your pupils can generate words that describe their chosen animal, and put them on the lines that begin with the same letters, or think of similar words to fit in the poem. Thinking about which words will fit and alternatives is a great way to kick-start your pupils’ creativity!

This year’s National Poetry Day theme is ‘vision’ you can use this theme alongside Peculiar Pets, here are some suggestions to help inspire you:
• Pupils can create their pet inspired by eyes – big eyes, one eye, multiple eyes, telescopic eyes, antenna, glasses, a monocle, goggles…
• Let pupils’ peculiar pets be inspired by what they can see. This could be in the classroom, at home, in a book, from a photo or scene…
• Go to the future, what are your pupils’ visions of what a futuristic pet would be like?
• Let your pupils be visionaries – creating their perfect peculiar pets!

Imagery is writing with very descriptive language that appeals to all of the reader’s senses. When imagery is written well, the reader can see, hear, taste, touch, and feel the text! What a fantastic way for your pupils to bring their peculiar pets to life in a poem!

Here is a quick class activity to get your pupils familiar with imagery before they write their poem:

Let pupils share their observations! Then they are ready to get creating and writing about their own peculiar pet!

Why not write an Alphabet poem! Your pupils need to write the alphabet as a list down the left-hand side of their page. Then, using their peculiar pet for inspiration pupils need to write a sentence for each letter. E.g:
A ngelic Mr Mould is the name of my peculiar pet,
B ig, hairy, yellow, stripey, kind and funny,
C auliflower is his favourite food, even though it makes him stinky.
D oesn’t sleep in a bed, but a compost heap instead!
…
X -ray vision to spy through the walls
Y ellow and stripey, like a stick of rock
Z zzzzz, Mr Mould snores as he sleeps at the end of my bed.

Ask your pupils to each pick 3 animals. These can be insects, sea creatures, pets, farm animals, wild animals or mythical beasts.

Now your pupils need to decide what animal parts go where; chicken head and feet, T-rex body with snake tail and tongue.

Next, your pupils need to think about where it lives, its diet, camouflage, what it does etc. They now have created a peculiar pet to write their poem about!

To make the activity interactive for home learning, why not invite your pupils to explain or do an impression of their peculiar pet! You could also encourage your pupils to read their poems to the class too!

A porcupine can fire its spines, a lizard can regenerate a limb and an elephant can use its trunk as a hand and straw!

Why not try writing riddle poems to see if we can guess the superhero animal!

1. Your pupils need to think of an animal or creature

2. Your pupils need to think of a simile to describe the way their peculiar pet moves
E.g. I move as quickly as a Ferrari at a race track

3. Your pupils need to think of two sentences to describe what their peculiar pet does
E.g. I can stretch my mouth wider than an ocean
I can coil like a spring, ready to strike!

4. Your pupils then think of something peculiar they’d like their pet to do – something that it wouldn’t usually do. E.g. I secretly like to roll in glitter so my skin sparkles as I sing karaoke

5. Your pupils finally need to think of a line to describe their peculiar pet which they can repeat in their poem
E.g. I am a slithering snake, king of the desert

Now it’s time to put the lines together in any order they wish, using the repeated line between.

Ask your pupils what animals would suit being a rapper. If these animals could rap what would they tell us?

We’ve used rhyme, rhythm and repetition to create a snappy rap for our rapping hamster...

Hamster was on her wheel
Creating herself buns of steel
As she ran she started to rap
“I’m a rapping hamster
I’m chubby but I’m fast
Race with me, you’ll come last
I’m a hip-hip, tip-top rap ham-star
I’m like no other hamster you’ve ever seen
Cheek pockets, eat rocket
Cotton wool bed, check my street cred
Running in a ball, crash into a wall
Give me a hug, I like it snug
Because I’m a hip-hip, tip-top rap ham-star!”

Let pupils have fun and even work together to create roarsome animal raps!

Get your pupils to face their fears! Are they scared of spiders? Dogs? Horses? Wasps? Snakes?
Then why not write an acrostic or narrative poem sharing their fears? These creatures might be loved by some, but to others they are peculiar just the way they are!