A Wander In The Woods |
Creative Writing Competition 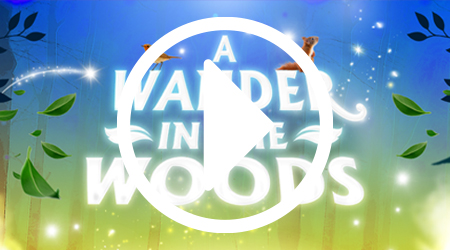 Engage your pupils with creative writing!

Inspire your young writers to write a mini saga, a story told in 100 words!

It’s your last chance to get involved in this amazing competition that has already inspired over 20,000 pupils to get writing!

Whether you get your class outside this summer and use the great outdoors to inspire their writing or explore language, character and plot from the comfort of your classroom, A Wander In The Woods will ignite imaginations and help your pupils create original stories.

By inviting your pupils to write a mini saga (a story told in just 100 words) it helps remove the fear of getting something wrong and seems less daunting, but trust us a lot of excitement, tension, suspense, fun and laughter can be packed into 100 words - you pupils will love the challenge!

If you go down to the woods today you're in for... an amazing lesson!

The children have loved your competition!

The Young Writers' Award of Excellence and a bundle of books for their school library for the school with the best selection of entries overall.

Each receives a framed certificate and a bundle of books for their school library!

(Winners will be chosen from entries received in the 2020/2021 academic year.)

Every participating school receives a complimentary copy of the book their pupils feature in.

(Winners will be chosen from entries received in the Spring Term 2021 and awarded next term. The goody bag contents may differ from the image.)

Every entrant receives a bookmark and sticker, and writers chosen for publication are awarded a certificate too!

Watch the video with your pupils to introduce them to A Wander In The Woods: https://youtu.be/wasjQAcXZQg

Next, play this game to help generate ideas to write about...

- Give pupils a word that’s on the wander in the woods theme, such as tree, fox, stream, camping etc
- Now ask a pupil to give you a word that’s associated with your word. (E.g. if you said tree, they might say leaf)
- The next player, in clockwise order, has to quickly say a word that has some connection with the previous word and so on

It’s a fun way to generate ideas on the theme. If any words mentioned stand out to you – make a note and discuss them with the class. Once you have finished playing the word association game, ask your pupils to write down an idea to write about.

Pick a woodland creature and help your pupils generate ideas on what the creature could be doing:
- On a quest to find an item
- Hiding from humans
- Helping nature
- Protecting treasure
- A guardian of woodland royalty

Encourage your pupils to be original! Once you have several ideas, discuss as a class which one you’ll write a class mini saga about. This will help your pupils understand the format of a mini saga and assist with generating ideas and planning too!

Sitting around a campfire telling stories is an old tradition and one that can inspire original mini sagas! The ghost story is a campfire classic but why not encourage your pupils to get creative...

Campfire stories can be creepy, funny, shared memories or fictional but they are always entertaining!

Can your pupils tell you any books with forests or woods in?

Don’t worry if not, here are a few:
• The Enchanted Woods (The Magic Faraway Tree by Enid Blyton)
• The Forbidden Forest (Harry Potter Series by JK Rowling)
• Hundred Acre Wood (Winnie the Pooh by AA Milne)
• Narnia (The Lion, The Witch and The Wardrobe by CS Lewis)
• Farthing Wood (The Animals of Farthing Wood by Colin Dann)

Your pupils can pick one of these, a real life wood or one from a book they love to inspire them.

Now ask them to close their eyes and imagine they are walking into those woods. Imagine using their senses, what can they see, hear, feel, touch and smell? Ask them to write down some notes. Share their ideas and then encourage them to start writing their wander in the woods inspired mini sagas!

Ask your pupils... what is winter in the forest like? What does it make you think of?

Have some fun! Get ridiculous...

Ask your pupils for the silliest things they could find in the woods... From a spaceship to a big pair of pants, have a giggle with your pupils generating these ideas.

Next, pick one of the silly items – ask your pupils to tell you how they think it got there or who it could belong to. Do the same with some of the other item suggestions too.

You should have a happy, excited class by now! It’s now time to get writing! The ‘once upon a time’ story starter is perfect for this activity. What funny woodland tales will your pupils create?

Verb action! Encourage your pupils to give power to their verbs rather than using adverbs. This not only makes for more exciting reading, but it also uses fewer words, which is perfect for mini saga writing!
E.g.
'He ran quickly' becomes 'He bolted'
'I spoke softly' becomes 'I whispered'
'Mary fell down' becomes 'Mary collapsed'.

Add a twist to the tale and ask your pupils to write from someone or something else’s point of view. They can still use a story starter if they want to. They could write from a tree or animal’s point of view, be the weather or even a mythical creature. It’s a fun way to get creative!

Let your pupils write the kind of story they’d love to read by letting them take the woodland setting and moving to a time or place they are interested in! It’s also a great way to link writing with other subjects such as History!

Play the A-Z of adjectives game!

Alternatively, you can split pupils into pairs or groups and give each group a 3-4 letter and 5 minutes to come up with as many adjectives as possible.

Once you have a list of adjectives, pick 3-4 and work as a class to create sentences using the words and help your pupils have fun exploring vocabulary!

Show, don’t tell! So what does this mean exactly?

Well, let’s have a look at this sentence: She was nervous.

There’s nothing wrong with that sentence. Except it’s telling the reader what’s happening, rather than showing them.

We could say: she bit the skin around her nails and tried to steady her breathing.

We know from this sentence that she’s nervous, but we’re never directly told it. This is the sign of good, confident writing.

Here are some sentences for your pupils to re-write using this technique:

To help your pupils create their story plot, why not couple a story starter with... a magical object?

This will help them not only start their story, but have a tool to help create a problem or dilemma and a solution too!

Let’s take sports day into the woods, what fun can we have?

Mini sagas don't need an introduction, they're only 100 words, so your pupils can skip straight to the action thanks to the story starters!

The reader doesn’t have to know everything about their main character, the weather, the setting etc - the setting is the woods so your pupils don't need to describe it (or even mention it!)

Anything that really matters only needs to be included, so the action, dilemma/problem and the solution.

It's a good reminder for your pupils, they don't need to get bogged down in detail.