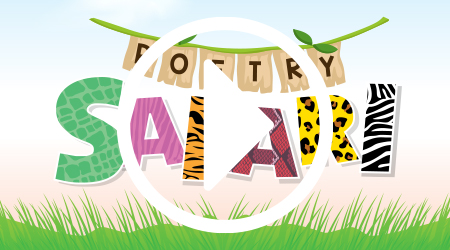 It's time for a roarsome poetry writing adventure!

Get writing today with Poetry Safari...

Poetry Safari lets you take your pupils anywhere... from the savannah, the Arctic or Jurassic times to the school field or a zoo. Have a writing adventure where acrostics, riddle or sense poems help your pupils use imagery and build vocabulary too!

It’s easy to link in with your current topic or favourite book, or let your pupils be inspired by a pet, animal or creature they love... or are even scared of!

We've also launched the Online Writing Portal where pupils can type their poems directly into during a lesson (or at home!) simply sign in or create your free teacher account at www.youngwriters.co.uk/teachers to access this.

The Young Writers' Award of Excellence and an awesome book bundle

A framed certificate and an awesome book bundle

School winners will be chosen from entries received in the 2020/2021 academic year.

Winners are chosen from entries received in the Summer Term 2021 and announced in the Autumn Term 2021. Goody bag contents may differ from photo.

Every entrant receives a sticker and bookmark.
A certificate of merit for all young writers chosen for publication!

Have you tried animal mash-ups to inspire your pupils to write an original animal-inspired poem?

An animal mash-up is where you take two (or more) animals and pick physical and character traits from each to create a new creature! From a cat’s fur and shark’s fin to duck feet and a snake’s lightning strike, this is a really fun way to get pupils’ imaginations fired up.

Once they have planned their animal mash-up, they are ready to name it and write a poem about it! Animal mash-ups lend themselves to both acrostics and riddles!

Ask pupils to imagine any animal or creature is their imaginary friend. What does their friend look like? What do they do? You can let pupils choose what they do with their animal companion, or you could suggest a setting such as a theme park, at school, or in the supermarket.

This is a great way to encourage younger pupils to write a narrative poem and use description in their writing too!

Share images of 'winter' wildlife with your pupils. From reindeer, Arctic foxes and hares, to penguins, polar bears and snow leopards, inspire your pupils' poetry with these wonderful creatures and their amazing snow-filled habitats!

This is a fab way to showcase both acrostics and sense poems!

It's a bug's life! Ask pupils to write a poem about an insect that interests them. They'll need to do some research to learn about their chosen minibeast, before writing their poem. You could also suggest that your pupils write a riddle or an acrostic - come and download our free online lesson plans and presentations for both these poetic forms!

Ask pupils to write a poem to an animal they love for Valentine's Day!

From the traditional 'roses are red' rhyme to a rap, narrative or sense poem explaining why they love this certain animal or pet so much, there is plenty of scope for original poetry writing!

Download the animal mask templates
Find some animal poetry books, we recommend:
“The National Geographic Book of Animal Poetry”
“Animal Poems” compiled by Jennifer Curry
“The Waggiest Tails” by Brian Moses and Roger Stevens
“Apes to Zebras: An A-Z of Shape Poems” by various poets
'Bananas In My Ears” by Michael Rosen
Let your pupils role play/do impressions. Take videos/photos, we’re sure parents would love to see!
Talk about animals – who has pets? What’s their favourite animal? Which animal scares them? Which animal is the coolest? Which animal would they most like to meet? Why?
Watch the Poetry Safari YouTube video
Let your pupils create their own Poetry Safari poems!

Play the “What Animal Am I?” game! Playing this game helps your pupils with description...

Split your class in groups
Provide each group a picture/photo of an animal/insect/sea creature etc.
Each group keeps their picture a secret from the other groups!
Each group works together to think of ways to describe their animal without saying the name of it! Encourage use of sense and colours to help describe
Once all the groups have completed their descriptions, bring the class together
Each groups takes it in turns to describe their photo...
Can the rest of the class guess which animal they are describing?

Have a poetry tea party!

Layout a tea party and invite children to come and role play. At this tea party, everyone has to sing their favourite nursery rhymes...

Encourage your pupils to make up their own silly songs and rhymes – this will help them when it comes to writing their riddle as they’ll be familiar with poetry and having fun with it.

Invite your pupils to suggest other animals and talk about the onomatopoeia sounds they could make. Onomatopoeia is a great addition to any animal poem!